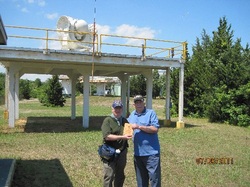 Bill Jackson & 1st Sergeant Donald Wood
Former NY-56 First Sergeant Donald Wood was presented with a plaque recognizing him as an Honorary Life Member of the Ft. Hancock Nike Association.  The plaque was presented to him on July 9, 2011 by Association President Bill Jackson while Sergeant Wood attended a tour of the Nike site with his family.  Sergeant Wood is the only person to ever receive this award from the Association. Thank you for your service TOP. 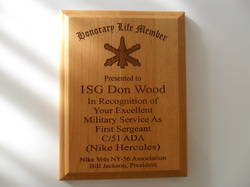